Great Archaeology Movies: The Eagle of the Ninth

British Archaeology magazine's July/August 2011 edition is just out. Of interest to Sutcliff fans is a commentary on Great Archaeology Movies. Lindsay Allason-Jones, one of the UK's foremost Roman Finds experts was the archaeology consultants to the movie of The Eagle of the Ninth. Here's a short quote from her:

"... I was first sent the draft script, which I blue pencilled savagely. Several incorrect details still got into the film (spot the fourth century brooch) but the final product was a great deal more accurate that it might have been ... Some things I could not change - neither of the [lead] actors were confident riders, so the insurance company insisted on them using stirrups, despite my comments that it was hard to fall out of a Roman saddle ..."

At least Sutcliff's name was spelled correctly, even if Lindsay Allason-Jones first name wasn't (Lyndsey?!). And yes, I did clock the forth century brooch - think it was in the scene in Uncle Aquila's villa, if memory serves ...
Posted by Sandra at 2:07 pm 1 comment:

In praise of… Rosemary Sutcliff

The Guardian is doing great stuff about The Eagle and Rosemary Sutcliff. The article here has a neat summary, as well as a lively set of reader comments:

http://www.guardian.co.uk/commentisfree/2011/mar/29/rosemary-sutcliff-in-praise-of?INTCMP=SRCH
Posted by Sandra at 9:39 am No comments:

Re-reading: The Eagle of the Ninth 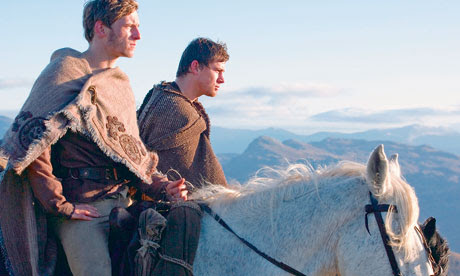 Charlotte Higgins of the Guardian re-considers the lure of Rosemary Sutcliff's The Eagle of the Ninth:

http://www.guardian.co.uk/books/2011/apr/02/eagle-of-the-ninth-rosemary-sutcliff?INTCMP=SRCH
Posted by Sandra at 9:18 am No comments:

Email ThisBlogThis!Share to TwitterShare to FacebookShare to Pinterest
Labels: Eagle of the Ninth

One Take on "The Eagle" Film

One tends to approach the film version of a favourite novel with some trepidation, especially if it’s a formative novel of one’s childhood, as greatly loved today as it was when first read. Have the film-makers changed it? Have they ruined it?

With The Eagle, the film based on Rosemary Sutcliff’s 1954 children’s novel The Eagle of the Ninth, the answer to the first question is ‘yes, and how!’

Whilst the main characters and the perilous quest for the lost Eagle standard of the Ninth Legion are still there, the film has no Cradoc, no Cottia, no Cub and the roles of Uncle Aquila and Guern the Hunter are cut short or changed. If you accept that cinema demands a different kind of storytelling from the novel and that it has time limitations, you’ll agree that it can’t embrace every nuance of character in a novel, or indeed every character; nor can it include every subplot, no matter how integral these are to the shaping of character and hence to the audience’s emotional investment in the story.

So have they ruined it?

I can’t help thinking that in The Eagle, the film-makers have slashed and burned with such abandon that the film bears only the most superficial resemblance to the novel. If I hadn’t read The Eagle of the Ninth I’d consider The Eagle a pretty good adventure film, more involving, more engaging than last year’s cartoonish Centurion, also based on the legend of the lost Ninth Legion. The film is well-paced, immediate and exciting in its chase and battle scenes (no freeze-frame or CGI silliness here); it has a strong sense of place and period – never mind the inaccuracies: most of the audience won’t care about those. And, no matter how little I like them, the changes in the story do have their own internal logic.

But I can’t un-read the novel. And without, I hope, my affection for it making me feel I own it (‘how dare they change what I love’), I think the film-makers have thrown the baby out with the bathwater.

The problem lies mainly with the central characters, Marcus and Esca. They lack the depth Sutcliff gives them in the novel and they don’t change as a result of the conflicts and ordeals they undergo (as epitomised in that horrible, trite ending). So it’s hard to take the heroes to our hearts – frankly, I don’t much care what happens to film-Marcus and film-Esca, I’m just enjoying the pursuits and the fights. Which, I suppose, is how the movie moguls de nos jours perceive themselves to be giving their target audience (young males 15-30?) what they want. I’d like to think they’d want more.

One of Sutcliff’s major themes in the novel is the bond of friendship and loyalty. The film keeps the master/slave relationship between Marcus and Esca throughout the quest, even reversing it during the most dangerous phase. So there’s no room for Marcus to free Esca before they set out and to declare, stirringly, ‘Esca, I should never have asked you to come with me into this hazard when you were not free to refuse…No one should ask a slave to go with him on such a hunting trail; but – he might ask a friend.’

Another important theme is that of the tension between conqueror and conquered. I'm sad that in the film there’s no Cradoc and no Cottia and therefore no indication, except on the most brutal level, of the clash of culture and outlook between Roman and Briton, much less how it might begin to be resolved. In the film, Marcus, if he thinks about them at all, appears to see Britons as unreconstructed savages from beginning to end. In the novel, his encounters with conquered Cradoc and semi-Romanised Cottia and her family, as well as his growing friendship with the enslaved Esca, all contribute to changing his attitude to Rome’s subjects, so that at the end of the novel he decides not to return to his native Italy but to settle in Britain of the ‘pale and changeful northern skies and the green plover calling’. Even if there was no time in the film for Cradoc and Cottia, surely the novel’s symbolism of Cub’s release or the wonderfully visual metaphor Esca makes from the contrast between the straight lines of the pattern on Marcus’s dagger sheath and the formless swirls on a British war shield could have taken their place? Surely there should have been room for at least one of these in a film nearly two hours long.

In sum, The Eagle, though good of its type, is a less interesting film than it might have been. But if it encourages people to read The Eagle of the Ninth and revives interest in Rosemary Sutcliff’s other absorbing, inspiring novels, then it will have done its work.

Email ThisBlogThis!Share to TwitterShare to FacebookShare to Pinterest
Labels: Aquila, Eagle of the Ninth, The Eagle 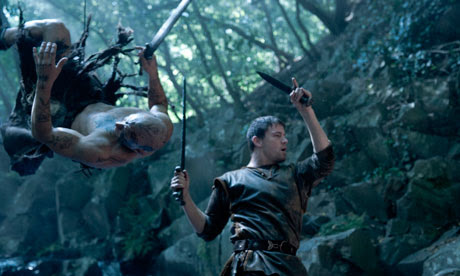 Thoughtful review by Philip French from The Observer, 27th March:

First published in 1954, The Eagle of the Ninth, Rosemary Sutcliff's novel for older children, is now regarded as a classic. Her title refers to the standard carried by the Ninth Legion of the Roman army that disappeared in the north of Britain in the second century AD, and it's the story of how the young Marcus Aquila later sets out to discover what happened to its leader, his father Flavius Aquila, and the 500 men he led ...

See the rest at:

http://www.guardian.co.uk/film/2011/mar/27/the-eagle-channing-tatum-review
Posted by Sandra at 8:20 pm No comments:

The Eagle - '...a solid, watchable piece of storytelling' 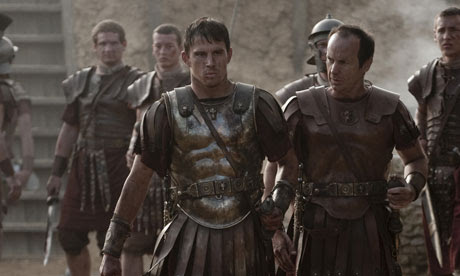 The 3 star review from the UK's Guardian newspaper:

'Kevin Macdonald has made a decent, forthright, if finally uninspired sword'n'sandal drama, based on Rosemary Sutcliff's 1954 children's novel The Eagle of the Ninth ... '

Find the rest of the review at:

Sutcliff and Sword at Sunset by Annis

Annis has written an interesting article about Sword at Sunset at:

"Sword at Sunset is a vision of the legendary King Arthur as the man he might really have been. Rosemary Sutcliff has created a compelling and memorable figure in Artos, a Romano-Celtic warrior prince who spends his life fighting to stem the tide of Saxon tribesmen who flood into Britain following the departure of the Roman army in the fifth century AD ... "


With a longer article about Rosemary Sutcliff at:

"Ask any baby-boomer who loves historical fiction what inspired their appreciation, and chances are the reply will be, “Well, when I was a kid I read Rosemary Sutcliff’s books”. Out of print for years, Sutcliff’s novels are making a comeback as their original readers reach an age when they can influence the reissue of old favourites ..."
Posted by Sandra at 12:23 pm No comments:

Anthony Lawton has moved the Rosemary Sutcliff site to:

There's also a Facebook page which can be found here:

The Eagle, released in the UK 23rd March 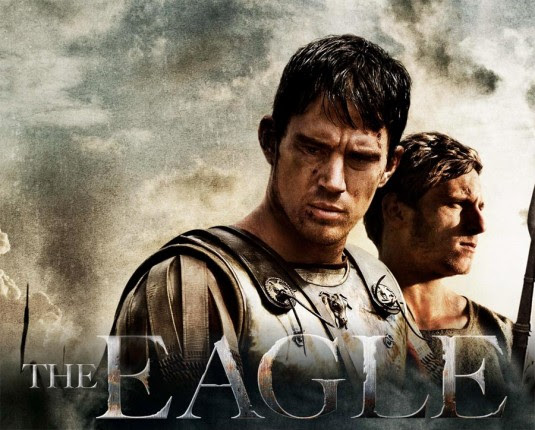 Adapted from The Eagle of the Ninth, this film is eagerly awaited. Reviews from the US are currently a little cautious, but Sutcliff fans are likely to turn out anyway. This blogger is looking forward to the 23rd March!
Posted by Sandra at 7:49 pm No comments: