Go for good writing -
Children
Another of Blyton's traits I dislike is her laziness. I don't believe she ever researched anything - unlike her contemporary Rosemary Sutcliff, whose posthumously published Dark Ages saga Sword Song (Bodley Head, Pounds 12.99, ISBN 0 370 323 94 7) is packed with precisely described Viking sea battles and sacrifices in a linguistic smorgasbord of thongs, thralls and fiery-bearded men.

I was never a Sutcliff fan as a child, tiring too quickly of the sun glinting off the halberds of people with names that sound like Haggis Bogtrotterson, but the opening of Sword Song is a stunner: a 16-year-old boy is exiled from his settlement for the manslaughter of a monk who had kicked his dog. Beat that, Melvin Burgess.

Regrettably, the story quavers thereafter, meandering around the coast of Britain as young Bjarni sells his fighting skills to one fiery-beardy after another, but the dense historical detail and rich colours are all still there.

Nursery rhyme and unreason -
Children's Paperbacks
Times, The (London, England)
July 11, 1992
Author: Brian Alderson
The Shield Ring by Rosemary Sutcliff (Puffin, Pounds 3.99): This story of how the Norse settlers of Butharsmere held out against the Norman invaders is one of Sutcliff's most engrossing novels. It has been too long out of print and this edition should be the cause of much rejoicing.
Posted by Sandra at 3:50 pm No comments:

Email ThisBlogThis!Share to TwitterShare to FacebookShare to Pinterest
Labels: Reviews

THE SHINING COMPANY, By Rosemary Sutcliff, The Bodley Head, Pounds 7.95

Y GODODDIN is not a species of baby-talk, but a tale of bloody strife, said to have been written around the end of the 7th century by the Welsh bard Aneirin. It tells how the High Chief of the Gododdin, Mynyddog Mwynfawr, called a hosting of the Celtic tribes at Edinburgh. There, for the space of a year, he trained a war-band of 300 princes and then unleashed them on the invading Saxons at the Battle of Catterick. Everything went wrong, and only one hero returned from the fray. But his exploits and those of his companions were celebrated by Aneirin in ``the Great Song that others will sing for a thousand years".

This Great Song is at the heart of Rosemary Sutcliff's Shining Company, thus bringing Aneirin longer life than he expected. For as he gave elegiac voice to the deeds of hero after hero, so she has taken the names from his telling and has sought to imagine them back int historical reality. Speaking through the persona of Prosper, the son of a Welsh chieftain, and eventually shieldbearer to the knight who returned, she begins by establishing a sense of the closed tribal world of the time after the Romans, and then introduces unbardic perceptions of form and motive. Personal relationships and the countryside of the Dark Ages become vital ingredients in the renewed story, and as the episodes pile up the ride to Edinburgh, the welding of disparate forces into a single fighting group so the reader is made ready for the great setpiece of the battle and the long dying fall of its tragic aftermath.

Such a theme is natural to Sutcliff's art. She is moved by simple concepts of loyalty and integrity that may be as foreign to today's children's literature as they were to the no-baby-talk Gododdin. But by admitting their possibility, while not shirking the real facts of ferocious woundings and pragmatic betrayals, she still persuades us that a bardic reading of the past is sustainable alongside an awareness of its squalor and its indifferent, but unpolluted, landscapes.
Section: Features
(c) Times Newspapers Limited 1990, 2003
Record Number: 1007894754
OpenURL Article Bookmark (right click, and copy the link location):
Violent land of our fathers
http://docs.newsbank.com/openurl?ctx_ver=z39.88-2004&rft_id=info:sid/iw.new
sbank.com:UKNB:&rft_val_format=info:ofi/fmt:kev:mtx:ctx&rft_dat=0F925AD4B76
8C85B&svc_dat=InfoWeb:aggregated4&req_dat=25636B4CC9A542FB9EC6D4B96A7A8F92
Posted by Sandra at 3:43 pm No comments:

Dom's contribution is hidden away in the comments, but he points out that Anthony Lawton has started a new blog at: rosemarysutcliff.wordpress.com
Posted by Sandra at 4:56 pm No comments:

Sutcliff on film? Eagle of the Ninth (November 2000)

BRITAIN has never had its own Ben Hur. However, hot on the heels of the success of Gladiator, this may change.

Duncan Kenworthy (the co-producer of comedy films such as Four Weddings and a Funeral and Notting Hill) has just bought an option on Rosemary Sutcliff's classic children's book The Eagle of the Ninth. Based on the true story of the lost Ninth Hispana Legion, which disappeared somewhere north of Hadrian's Wall in the second century AD, it is a romping tale about a young legionary, Marcus, who ventures into Scotland to look for the missing soldiers, including his father, and their standard.

It is an odd project for Kenworthy but it will be good to see the Romans in Britain for once. Let's just pray that the producer does not want to cast Hugh Grant as Marcus . . . 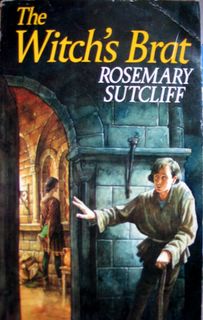